Class of 2019 Valedictorian and Salutatorian

Kira Milgrim is the KHS Class of 2019 Valedictorian! She earned a 100.389 Grade Point Average.

Kira, a student of the Kingston City School District since kindergarten, attended Edson Elementary and J. Watson Bailey Middle School paving her way up to Kingston High School. While at Bailey as an 8th-grader she joined the Band and found an interest that she continued throughout her four years at KHS. She earned her status as Drum Major on Podium this school year, getting to conduct the Band during performances and competitions. Kira was also in Color Guard for four years and a saxophonist in the KHS Concert Band.

Senior year has been packed with a course load full of Advanced Placement (AP) classes for Milgrim, taking on AP Calculus, AP Chemistry, AP Physics-Mechanics, and College Spanish II. Her hard-work will put Kira about a semester ahead when she starts college in the fall.

Boston University is Kira’s college of choice where she will embark on her journey as a Biomedical Engineer Major. She has a goal to attend medical school and finish with a career as a Pediatric Surgeon.

She offers a bit of insight to the KHS underclassmen: “Being valedictorian should not be the end goal. Kids should do what they love, work hard, and do what they care about. The grades will come.” 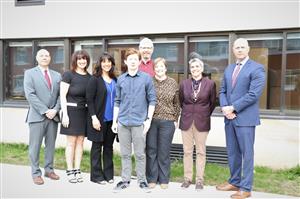 Coleman Kane-Horrigan is the KHS Class of 2019 Salutatorian! He earned a 100.255 Grade Point Average.

Coleman attended Edson and Anna Devine Elementary schools, then started his secondary education at the Hudson Valley Sudbury School before making his way to Kingston High School. Over the course of his high school career, he found a few of his favorite classes to be in AP European History with Mr. Sullivan, Chemistry Honors with Mrs. Janums, and Physics Honors with Mrs. Johnston.

During his senior year, Coleman has encountered a challenging full schedule consisting of AP English Literature, AP Computer Science, Physics Honors, Pre-Calculus Honors, Astronomy, AP Macro Economics, and AP U.S. Government and Politics. This is quite a feat and it doesn’t end there! Outside of the classroom, Mr. Kane-Horrigan enjoys his time as President of the Academic Worldquest Club, President of Highlights, Vice President of Science Olympiads, and is a member of the Robotics Club.

Coleman is looking forward to graduation and is still considering where he will continue his education. He plans to major in Civil Engineering at either the University at Buffalo or Cooper Union in New York City.

“Put effort into developing good study and work habits,” he suggests to future KHS graduates. “Expose yourself to new experiences that are outside your comfort zone.”

Congratulations to Kira and Coleman!